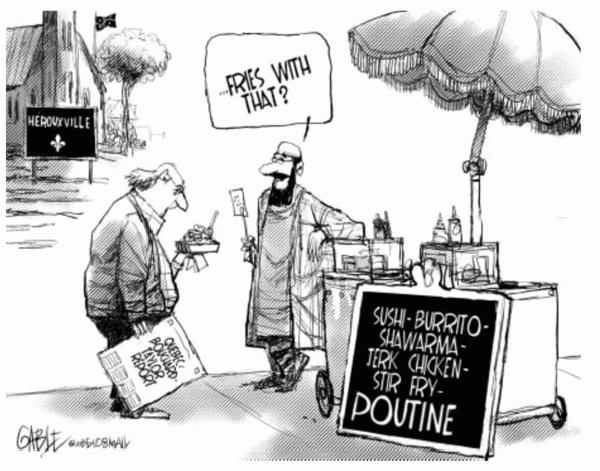 This was my paper to the :
Public English Forum of the Bouchard-Taylor Commission on “Reasonable Accommodation”

Although the English speaking community is often wrongly considered as being a well-treated minority in Quebec, I believe there is a significant lack of an appropriate accommodation provided by successive governments of this province. In addition, recent events have occurred that impact the English fact and our future in Quebec.

I shall focus only in one area of concern, that of education. The dropping birthrate, flight from the province because of linguistic legislation, and restrictive practices regarding school entry have combined to produce legitimate worries about the future of one of the provinces founding people – the English community. Undeniably, this community has contributed significantly to the social, economic and cultural development of Quebec.

It has been argued that the English school system has the opportunity to elect commissioners, purportedly to represent our interests; hence, they should act as the voice for the frustrations of our community. That was true when public school boards fought for rights issues and the community.

Unfortunately, today’s so-called representatives of the education system have provided no support for a formal challenge to restrictive legislation. These laws, which infringe on the country’s charter rights, prevent mother tongue Canadian citizens from enrolling their children in the school where the country’s official language is taught. Where else in the world would this state of affairs be permitted to exist? Quebec laws also contravene the U.N. Charter of Rights, yet nothing is said by our alleged representatives, in this case the Quebec English School Boards Association (QESBA).

A recent example was the silence of QESBA regarding the challenge to the law – Bill 104. The challenge was not undertaken by our elected officials but by private citizens. Justice delayed is indeed justice denied, and this case, in particular, it is the latter, for that delay prevents a right from ever being exercised by the individuals so affected.

QESBA has to this point, given no inkling that it intends to support the challenge or even join the fight against the legislation. The commissioners often seem more attached to their provincial political party than to the community that they claim to represent. Their leadership and support is woefully lacking as evidenced by their meaningless honey-worded resolutions passed at school board meetings. Maybe the puny turnout in the recent school-board elections underlines the dissatisfaction of the status quo.

I believe we need a more militant approach to fight for rights in education. Sadly, neither the federal nor the provincial governments show any interest in defending this province’s minority.

For example: the Quebec Provincial Association of Teachers have recently donated $20,000 to fight the law but the real tragedy is that those whose supposed aim is to represent us – to protect us – have abandoned us.

It is worth noting at this point, that recently at the Pearson school board meeting, the chairperson was asked whether they would contribute money to help underwrite the legal costs incurred by financially needy litigants. Equally important to note is that the English school boards have millions of dollars in surpluses and the issue of this legal challenge has been known for some time, yet the chairperson of the board still procrastinates on taking any action or involvement.

Contrast that reluctance with the eagerness of the board to spend money so that certain commissioners could attend the National School Boards Association convention in Orlando, Florida next March. Defending students’ constitutional rights is eclipsed by commissioners who seemed to opt for public monies to pay for junkets to foreign countries. This speaks oceans about QESBA’s priorities.

The English community does require a greater accommodation. Where are our representatives to demand it ?

Anglophones speak up at Bouchard-Taylor Commission
While the microphone did not reach West Islander Chris Eustace before the evening was over, the retired teacher submitted a letter to the commission calling for better access to English schools for all. “We’re talking about education. We’re talking about English rights. We’re talking about accommodating kids,” Eustace said, referring to Bill 104, which he says limits English-speaking Canadian citizens’ access to English schools in Quebec. Last week, the Quebec Provincial Association of Teachers, initiated by the Laurier Teachers Union, announced it plans to give $20,000 to the legal defense fund for parents contesting Bill 104 in hopes of getting their children into English schools. “There’s a very important issue here. What we’re also doing regarding this education business is keeping possible good immigrants who could contribute out of the province because of the because of these restrictive laws.”