For about two years, I have been trying with letters, and verbally at the Public Question Period at the Pearson Council and Executive meetings to include a clause in its Code of Ethics for Commissioners, which would state that a commissioner can only do business with the board after, at least a year has elapsed.

Alas, my requests have been ignored.

To understand my concern in this matter, we must look at an excerpt from a recent area media report in which former Lester B. Pearson School Board head responded to questions concernong his new job.” (June 6, 2011).

” During last week’s LBPSB school board meeting, a question was raised by a member of the public about Tabachnick’s (then) new job with Ameresco Canada Inc. and whether it was above board.”

A few months ago, the Pearson board signed a $5.4 million contract with the aforementioned company.

School board elections are slated for November 2, and there will be commissioners who will be out of work, so to speak, due to a provision in Bill 88, which calls for fewer commissioners.

Commissioners need clear rules that dictate what they can and cannot do after leaving office.

It is the law. 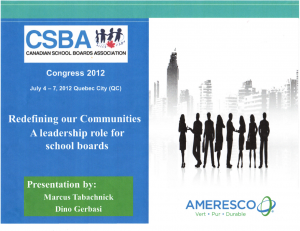