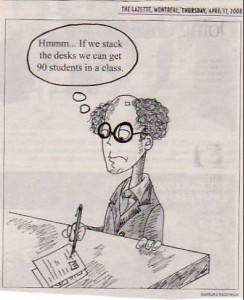 Pearson’s view on class size troubling – Letter to the editor

According to a June 12 article in The Gazette ($100 million boost for kids), the action taken by the government was welcomed by the Fédération des commissions scolaires du Quebec.

“There’s not that much evidence to suggest that class size reduction is the first and best way to improve services to kids. We’re not at all convinced and we don’t think the evidence shows that.” (Gazette, June 12)

Maybe he was acting as an apologist for the Pearson board’s woeful record on class size. Last September and February, the Pearson teachers’ representative complained to the Pearson board concerning literally hundreds of oversized classes in Pearson high schools.

Teachers certainly believe in lowering class sizes, but does the Pearson board disagree with the teachers and the government, and instead support Birnbaum’s claim?

Consequently, at the Pearson board meeting of Aug. 25, I recounted the Gazette article and read the statement of Birnbaum to the council.

I asked chairperson Marcus Tabachnick to answer the following question:

“Does this statement reflect the beliefs and practices of the Pearson school board? In responding, Mr. Chairman, would you permit individual commissioners to voice their opinions on this matter?”

Tabachnick avoided giving a clear response. Moreover, not one commissioner was allowed to speak.

This incident further demonstrates why the community must support draft law Bill 88 that was introduced in May. This overdue legislation calls for the modernization of school board democracy and governance, and accentuates the need for school boards to be answerable and accountable to the parents and taxpayers.

The teachers’ union of the Lester B.Pearson School Board is fighting the board to get it to cut down the size of their classes, which they say are violating the terms of their collective agreement.

John Donnelly, head of the teachers’ union, said the breaking point came during the last school year when the number of classes that went over the allowed student limit tripled, from 300 to 900.

“So at that point we decided this couldn’t continue,” Donnelly told CJAD 800 News.

“For the last at least ten years the board has been exceeding class sizes with generally no reason to do it.”

Classes that are supposed to have 18-22 students would go over by 1 to as many as 12 students, most of them special needs students, so even one student can add on to an already heavy workload, Donnelly said.

“We would maintain a cause for teacher burnout,” Donnelly argued.

“There are many young teachers who are put in a position of having to teach these oversized classes and it is a stress and a strain.”

Donnelly said if the board insists on packing more special needs students into their classrooms, then they need more teachers and resources to handle it. Or, Donnelly said, they could transfer students into another school in the same jurisdiction.

A labour arbitrator is expected to rule next month. The board would not comment before then.

Pincourt elementary school to be expanded

Quebec’s education ministry has announced a $78 million investment in the construction and expansion of elementary schools province-wide.

The Lester B. Pearson school board stands to benefit from that. They will get some of that money to expand St. Patrick’s Elementary in Pincourt, which would eventually expand the school to be able to accommodate a total of 588 students, up from the current 278.

In all, the government is footing the bill for the construction of five new schools, and the expansion of six others, aside from St. Patrick’s.

It’s hoped the expansion work would begin immediately, and be done in time for the start of the 2014-2015 school year.

“We’re thrilled,” says Lester B. Pearson chair Suanne Stein-Day. “This gives us breathing room on our off-island territory for a couple of years.

The area is one of the fastest-growing areas in the province, and the board’s two elementary schools in Pincourt, St. Patrick’s and Edgewater, are filling up fast.

“What happens when a school gets too full, there’s no room for a music room, there’s no room for a multi-purpose room that they could use for art or special projects…which really restricts what the kids could do,” Stein-Day says. “The new design [for St. Patrick’s] will let us have a good-sized library, a good-sized playground, as well as a few more parking spaces for the new teachers.”

Stein-Day ads if population trends continue as they have been, they will have to build a brand new school within a few years.

Crammed schools ; bulging classrooms
This is a good news story. The Quebec government is allocating monies for a much-needed expansion of St. Patrick elementary school , located in the fast-growing, ‘bedroom community’ of Pincourt.

According to reports, the overcrowded school will no longer need portable classrooms and will be able to accommodate 588 students, ” up from the current 278,” and is slated to open with the expansion, in Sept. 2014.

That said, there is another matter that also needs attention : oversized classes.

Consider: In a letter to the Gazette Editor on Jan. 10, 2008, titled: ” Forum should look at reducing class size , ” I wrote: ” It was recently reported that there are over 740 bulging classrooms at the secondary level of the Pearson board.”

In a CJAD story, on Feb. 6, 2013, “Teachers fight oversized classes,” the teachers’ union president said the number of classes that went over the allowed student limit tripled, from 300 to 900.”

Teachers want classes of manageable sizes ; there is, indeed, a correlation between smaller class size and higher student achievement, and drop out rate.

It is evident on the matter of overloaded classes, there has been no improvement over the years, at Pearson schools.

The LBPSB must invest in reducing class size by hiring more teachers / aides for the classroom, by cutting back on the unnecessary expenses emanating from the boardroom.

Class size does matter. Pearson’s aim should be for smaller class sizes for September 2013.