(The following letter was written by the Political Attaché of my then MNA Yolande James.  The letter was written in reaction to the Gazette story below.  “S.Day” is Suanne Stein Day, former chair of the Central Parents Committee, who was not helpful. It was amazing how the LBPSB was fully aware of this project but managed to twist things around with grossly exaggerated statements, by the chairman, resulting in scores of agencies getting involved.  Overnight, it went from being thanked to distribute the booklets  to “mishandled” the booklets.  Finally,  MNAs Geoffrey Kelley, Pierre Marsan, and François Ouimet came to the rescue of YJ and me and put out thousands of booklets)

I am writing to you today to clarify our office’s position concerning the Youth Resources Handbook, since we found out about your article only after its publication and since we did not have the opportunity to speak prior to it.

A couple of months ago, Mr. Eustace dropped by the office and handed us last year’s edition of the booklet. We were very aware that it was one of theCommunity Resource Center’s (CRC) annual publications. However, Mr. Eustace informed us that he found that the information contained in the booklet did not have enough reach with the youth since there were not enough printouts of it. He thought that the best way to achieve a widest reach would be to include the information contained in the booklet within the students’ agenda. We agreed.

As you probably already know, the electronic version of the booklet is already given by the CRC to the individual schools who can, at their own discretion, publish the information in the students’ agendas. When Mr. Eustace came to see us, I asked him whether or not he knew why this information was not contained in every agenda (although some school publish part of the booklet). He was not certain of the answer but he suspected it might be partly due to a financial decision.

At that point, we decided to throw back the ball at the principals of the schools in the Lester B. Pearson School Board. We proposed that if they wish to publish this information, the four West Island MNAs would consider funding its cost. However, we made it clear that the decision was clearly not ours but theirs and if they were hesitating solely because of budgetary constraints, we were there to help.

We also knew that time was playing against us because we had a June 15th deadline to get the information to the printers and we were already at the end of May by that point. Since we had not heard anything by the beginning of June, we figured that they did not have time to properly review our proposal and that we would try again next year, since we now had ample time.

I have continuously kept Ann Davidson informed of our position and as such I called her and informed her of the lack of an answer from the school principals. During that same discussion she asked whether it would be possible to assign those funds to the printing of more booklets in order for the CRC to double their number. It sounded like a good alternative and asked that she send me a written proposal.
Furthermore, I have also kept Mr. Eustace informed our of progress since he is the one who originally approached us with it. I also informed him of the new proposal that the CRC made to us. In an email he sent in mid-June, he informed us that he would be attending the Council of Commissioners’ meeting on June 26th and that he would request that they fund the balance of the booklets needed.

You have been informed of the outcome of the rest of this story.

Our position has remained the same from the beginning. We are willing to assist in any way we can. We will continue to work with Ann Davidson, the CRC, the School  Board and Mr. Eustace (should he decide to continue with the CRC’s latest proposal). Ultimately, we seek to find the best way of getting this resource to those who need it most, the youth.

I am sorry for the lengthy email but I felt that we are needed to see everyone’s else perspective on this issue. 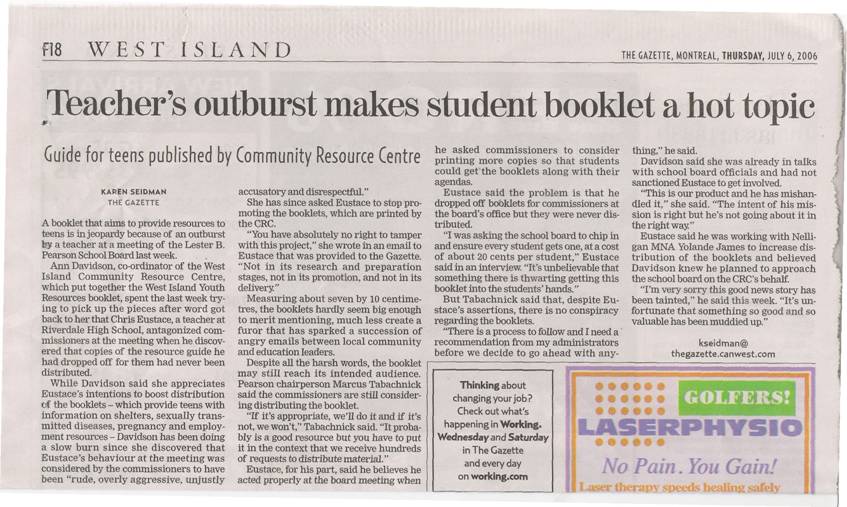