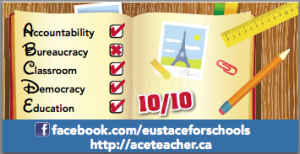 As previously stated, I will present my platform using an alphabetical format:
…..
A:   is for

ANACHRONISTIC :  belonging to another time ; out-of-date

ARROGANCE:       “showing proud self importance and contempt or disregard for others”  (Microsoft Encarta College Dictionary)
…
AMERESCO:

In April 2011, former chairman of the Lester B.Pearson School Board, Marcus Tabachnick, suddenly quit, to work as a salesman for the company Ameresco. The story is summed up in the PDF below and further on this site. I complained to the LBPSB at meetings and in writing  – and to UPAC (Unité permanente anticorruption). The latter was kept apprised of the goings-on, which culminated in the signing of a contract worth $5.4M , after eleven other bidding companies suddenly dropped out.
…

A ‘Public Relations’ tip from the Association of Alaska School Boards (www.aasb.org) states:  “Tell the Truth.”

“Never lie to a reporter – or to your staff, or to the public, even, if it hurts. It will hurt worse if someone has to dig out the facts because you haven’t been honest. Intentionally providing inaccurate or misleading information will affect your credibility and possibly tarnish the reputation of your schools.”
The Gazette:
Last school year there were many examples of misleading stories told by LBPSB Chairperson Suanne Stein Day (SSD).  Suffice it to say that it was necessary for the education reporter of The Gazette, to put out two ‘For The Record’ corrections (Oct. 5,10) because of misinformation given by SSD following the article on school boards that featured SSD and me : “Essential service or needless bureaucracy?” (Oct. 3, 2013).
The Suburban
The Editor of The Suburban  was obligated twice to correct written misinformation, in letters to the Editor, by SSD  (Dec. 11, 2013, “Critic silenced at LBPSB,” based on article with the same title, Dec. 4; and May 7, 2014 “LBPSB boots parent, commissioner and opposition candidate,” Apr. 30, 2014)
First LBPSB Ethics Inquiry
The inquiry was initiated by me because SSD would not allow me to ask questions pertaining to the Annual Budget 2012-2013.  The case is described further on this site.  I lost.
Both SSD and I gave taped testimony under oath at different times.  There is no question, testimony was given to impugn my character and tarnish my reputation.
I have asked Chairperson Suanne Stein Day / the board  to release to the public the taped testimony , given under oath , concerning her refusal to allow me to ask questions on the Budget , as legally permitted under the Education Act.

So far, SSD has refused. The truth is elusive at the LBPSB. This is a matter of integrity and credibility.

Since we are both running to be chairperson of the board, the release of the tapes would educate the public regarding the character, values and ethics of those who wish to govern the LBPSB.

The above gives reason why we need an improved and more complete Code of Ethics for the Lester B. Pearson School Board Commissioners.

W:  Whose next? Wreck, Whistleblower