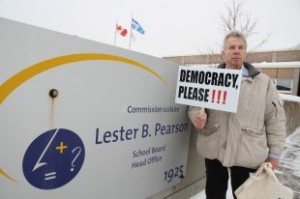 Pierrefonds resident Chris Eustace has a bone to pick with the Lester B. Pearson School Board which has refused to allow him to ask questions at the public board meetings. Photo by Rob Amyot.

Retired teacher and Pierrefonds resident Chris Eustace is crying foul after the Lester B. Pearson School Board (LBPSB) has refused to allow him to ask questions during the public question period of the council meetings.

As The Chronicle first reported in its April 22 issue, Eustace was first denied his right to ask a question at an April 12 special council of commissioners meeting. Questions were taken by other citizens who attended the meeting but as Eustace got up to the microphone with a sign that said ‘Vive Parental Choice,’ LBPSB chairman Marcus Tabachnick abruptly called the meeting to a close. At three subsequent LBPSB meetings, Eustace was not allowed to ask questions or did not receive a response when he did.

“I started going to the executive committee meetings last June because I realized that Tabachnick would not allow me to speak at board meetings anymore,” he said. “I always wrote them in advance, telling them I’d be coming down and asking these specific questions. It prevents answers like ‘we don’t know.’”

Tabachnick says he has refused Eustace the right to ask questions because of his behaviour.

“One of my jobs is to keep order and good behaviour at council meetings,” he said. “To have him come, misrepresent statements, take things out of context, insist he is quoting me on things I’ve never said, accuse the board of all types of indiscretions, using very coached words and then to do so by yelling and screaming at us, does not meet the standard of good behaviour in a public context. We have rules about public participation at meetings and he is well aware of them.”

According to the LPBSB rules of internal management of the council of commissioners — part of its manual of policies, procedures and by-laws — the chairman “ensures order, peace and decorum and also that the meetings run smoothly.” It also states “the Chairman decides whether or not to answer (the questions) or refer them to the most appropriate person.”

Eustace says he has never acted inappropriately however. At the two meetings a Chronicle reporter attended, Eustace did not scream or yell, only getting up to speak with a sign in his hand. Others have noted that he has raised his voice before. Whether his statements are false or misrepresented, it was not investigated further and his words were not reported. The minutes of the meeting did not record his questions.

Tabachnick recognizes the tension between him and Eustace and has tried to set up a meeting to discuss the problems.

“I have offered, on three or four occasions, to meet with Eustace to try and work out whatever differences are between us but he has refused,” Tabachnick said. “He had a whole series of conditions for meeting. This was a good-faith attempt for one adult to speak to another adult to work out the issues; it’s not a public forum.”

Eustace admits he refused to meet with Tabachnick unless another commissioner was present and the meeting was taped, by video or audio. Until the meeting though, Eustace is not allowed to asked questions.

“I have never refused people who have wanted to speak,” Tabachnick said. “But you have to do so in a proper and acceptable manner. (Eustace has) had one too many tantrums and has acted so completely unacceptably.”