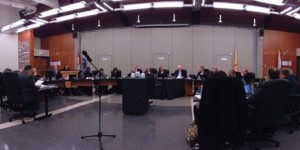 Lester B. Pearson School Board (LBPSB) chair Suanne Stein-Day has barred longtime education watchdog Chris Eustace from asking questions during the commissioners’ and executive committee public meetings.
She ordered Eustace to sit down when he approached the microphone during the commissioners’ Nov. 25 meeting, and called for security guards to enforce her ruling, after he asked her why. Eustace complied without incident, and sat mute through the remainder of the two-hour meeting.
Stein-Day subsequently explained that she silenced Eustace because of personal comments that she alleged he made about her during the previous commissioners and executive committee meetings.
Eustace was once again the only member of the public other than union members and their representatives to attend the meeting. The following day, he forwarded to The Suburban an electronic mail message that he had sent to school commissioners before the meeting, detailing all the questions he had intended to pose.

He wanted to know whether LBPSB would inspect all its schools for mould, radon air quality and share the findings with school governing boards, which are mostly made up of parents.
Stein-Day subsequently said that she would provide details of radon test results to any governing board that requests them.
She added that LBPSB is waiting until it has completed all its testing before it releases more information.
In the meantime, she disclosed that the school board has taken remedial measures at St. Patrick’s Elementary School in Pincourt, as a precaution, in the wake of anomalous radon test results there.
Eustace also wanted to ask whether LBPSB would clarify its code of ethics to specify the length of time former commissioner must wait after leaving the council before transacting business with the school board.
In addition, he wanted to question LBPSB administrative expenses, asking the board to quantify its decline in enrolment during the past five years and whether the number of headquarters personnel has decreased proportionately during the same period.

Stein-Day did entertain a pair of questions submitted via Internet, asking why the council had not cast its net more widely before appointing unelected commissioners to fill two vacancies left after commissioners Rosemary Murphy (Ward 7) and Sue Williams (Ward 12) retired at the beginning of November.
“We didn’t feel the need to bring in outside members of the public,” Stein-Day replied in justifying naming Nan Beaton an Domenic Pavone, who had hitherto served as parent representatives to the LBPSB council. “We were very satisfied with what these [non-voting] commissioners had done.