Home » Michelle Courchesne, Bill 88 and Me 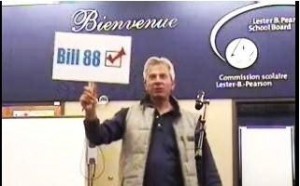 Bill 88 was passed in the autumn of 2008 by Minister of Education Michelle Courchesne of the Charest government. As a retired teacher and school board critic, I was much in favour of the Bill and wrote many letters to editors praising its benefits.

In February 2014, the Quebec English School Boards Association, who for years criticized the law, invited Madame Courchesne to one of its “Commissioner Readiness ” events promoting the school elections slated for Nov. 2014.

The meeting was held at the Pearson board and was webcast. The following letter to the Editor of the Gazette Vaudreuil-Soulanges was published on Feb. 27, 2014.

Compliments to former Minister of Education Michelle Courchesne for her inspirational talk on Feb. 22, webcast from the Pearson board, promoting the upcoming November 2014 school board elections.

Her presentation referred to features of her parent-friendly Bill 88, Gouvernance et de la démocratie scolaire which became law in the autumn of 2008.

The law was created due to a pathetic voter turnout (7% French; 14% English) in the 2007 school board elections, when about 70 per cent of the seats in the province were acclaimed.

Basically, the law called for the modernization of school board democracy. It would shrink the power of school boards and make the administrative bodies more accessible and more accountable to parents.

Law aside, I found Madame Courchesne’s remarks to be most telling. She said “school boards should accept criticism,” and should listen because it is a “sign of respect.”
She concluded: “parents are the authority.”
Precisely !

Prior to that though, following the above talk, which I saw on the webcast system, I fired off a note, to be posted on the sidebar blog, in the hope the former minister would hear about it. The note said: “Compliments to former Education Minister Michelle Courchesne for her talk on school board democracy and the benefits of Bill 88.”

At last month’s Council meeting, around the 55 minute mark, Mr. Luc Horne complained that he had written comments once before, and they were ignored by the person manning the system – the chair of Lester B. Pearson School Board . Listen to what he says.

This is what the citizens , the taxpayers of the Pearson board have to contend with. I reported my experience to the commissioners but this is the standards we have been accustomed to over the years. Very little is straight up.
Anyway, I have made inquiries, and , in the event I am elected chairperson, I hope to invite Madame Courchesne, in January or February , to talk to us, and teach us about Bill 88.

Time for a New Order.